The final monster building guidelines I ended up with can be found at the end of the article (skip to the end) but if you want to know how I got there, read on...

Back in March, Mike Mearls added a thought to Twitter:

Want to cut down on referencing monster stats as you play? Use half a monster's CR as its bonus for all checks and saves. If the monster has legendary actions or is notably powerful in your campaign, also add its proficiency bonus.

You'll note the lack of #wotcstaff hashtag so this is on the down-low.

Evan Miller then followed up with:

Taking these two posts as a basis I realised all you need to do is add AC, a weapon, perhaps a special ability and you're pretty much done.

I've decided to ignore the monster features (DMG281) as this is just a rough and ready "I need some stats, stat".

You know those spiky seeds about an inch across that cling to your clothes? Those are my inspiration and I'm going to call them Pobbles (after the poem).

Pobbles are "tiny" creatures, about six inches diameter, that attach to unwary adventurers. Once caught in their grip, more rapidly attach to the victim in order to drag them to the floor and gorge themselves silly.

Pobbles attack in packs so we'll treat them as a swarm.

I know from my encounter building budget that my party of six level five adventurers will have a hard fight with a CR8 creature so I'll use that as my starting point.

This Swarm of Pobbles will be a CR 8 creature and have:

Their attack is dependent on the first one latching on with others joining to drag their prey down so they can have a multi-attack with two attacks:

If the target end their turn still grappled they take 1d4+1d8+2 damage each round as more pile on.

For a special attack let's re-flavour a spell... skimming through the PHB I think I'm looking for something blood draining or necrotic... so probably a Warlock spell... Crown of Madness sounds like something that might happen to a person covered in Pobbles, let's see...

One humanoid of your choice that you can see within range must succeed on a Wisdom saving throw or become charmed by you for the duration. While the target is charmed in this way, a twisted crown of jagged iron appears on its head, and a madness glows in its eyes.

Lovely. Let's re-flavour to taste and use 8 + half CR for the save DC:

That works quite well I think so let's put all this together:

Turning to the monster building guidelines in the Dungeon Master's Guide (page 274) we can see how this unaligned creature measures up to it's target CR.

Okay... so all in all what I seem to have created is CR 4 creature. Damn.

What does it do for the rest of our rules?

XP is an issue because it has an exponential growth. Maybe it's best to reference the table for that. Or perhaps simplify it into three tiers, 1-10, 11-20, and then ignore 21-30; if you're throwing a creature at your party above level 20 you'll probably not be doing this on the fly.

AC I can live with and would be based mostly on flavour, eg, thick hide or scales or whatever, but that's a big drop in HP so let's have a look a little closer at that: 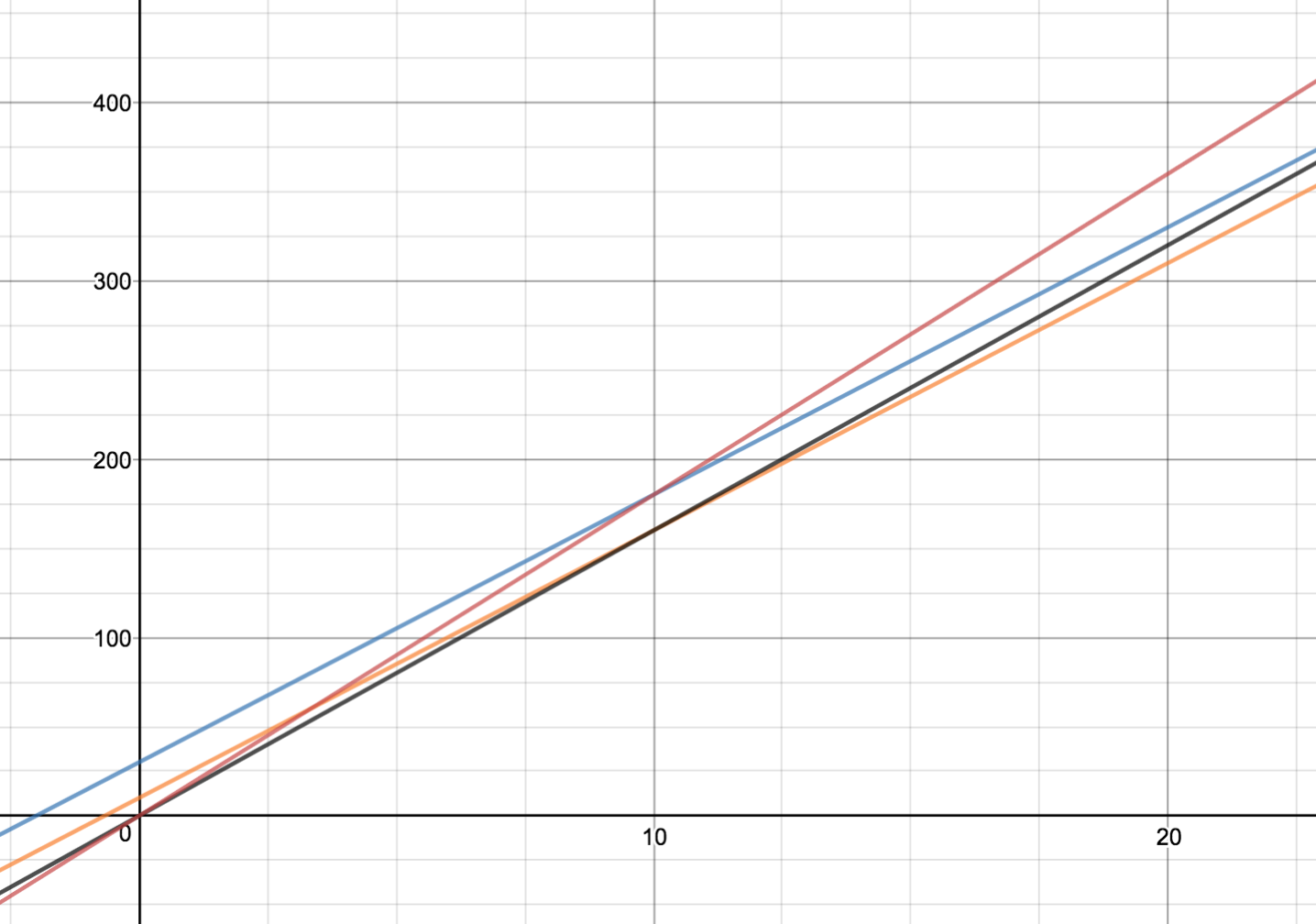 The orange line is original estimate, 15x+10; looking back at Evan Miller's line of best fit I think we can readjust based on the fact we're only dealing with up to level 20.

Taking that into account means at level 20 we want our monster to have an average of ~350HP so I try a couple of fixes...

Finally, the red line, 18x; the line fits well even though it's probably about 360HP at level 20

Proficiency is just correct enough to not care too much and we can still use half CR for checks and saves but attack bonus needs a little bump, about +2, to come close to standard.

Damage output needs a bit more than just ripping off and re-skinning an existing weapon...

Damage works out at roughly half CR x10 till you get to about CR 20 (which we're not focusing on anyway), so let's use damage output instead; about CRd8+CR is a little weak but gets you roughly in the ballpark.

So let's have another whack at building this beast...

Putting all that together leaves us with the following:

So bit rough and ready but should get you through a session in a pinch.