When redesigning the tables for my Dungeon Master screen I've been trying to figure out simpler, more effective ways to build up a game on the fly. 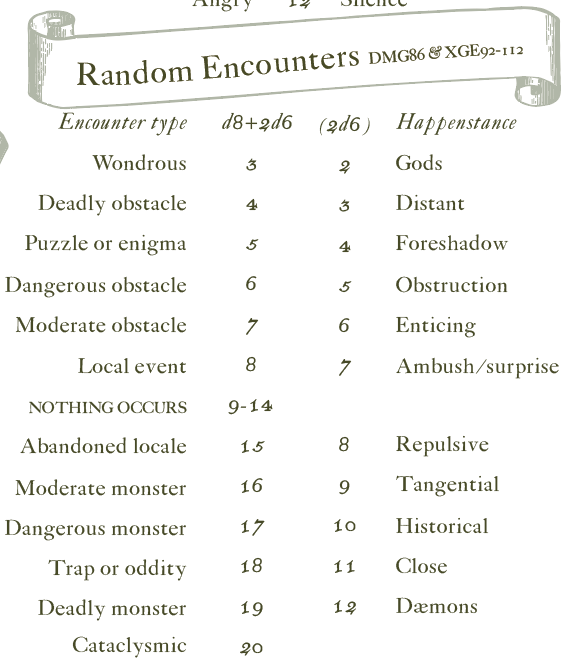 When creating the original version (pictured below), I looked at the tables in the Players Handbook and Dungeon Master's Guide, attempted to decipher what those encounter examples were trying to achieve, eg. combat, world building, etc., and then used the standard rules for when an encounter should occur.

This new version began attempting to match to a similar probability of an encounter occurring (15%) but also choosing the encounter type in one roll which led to using a 1d12+1d20 roll (31 possible outcomes). Realising I wanted a greater chance of an encounter to occur (~40%) and not wishing to come up with 20 types of encounter, I dropped a couple of die sizes to and came up with a 2d6+1d8 bell curve where nothing occurs on rolls between 9 to 14.

The bonus of using three dice was two-fold:

Embellishing on the encounter types from my original table, I polished up 12 possible outcomes, gave the obstacles and potential combats a rating (deadly, etc.), then started to think about how else I could use that 2d6 roll…

Realising an instigating factor for an encounter would be useful to have in a pinch, I built out the right side of the table, trying to add an extra layer of detail but keeping it open-ended enough for the DM to improvise at the table.

An ambush was easy and I figured the most common occurrence but I liked the idea of a party surprising the object too so that was position 7 sorted.

6 & 9, Enticing/Repulsive are there to provoke the party into action.

5, an Obstruction, would force the party into action while 9, Tangential, would mean the party could easily bypass the situation if they didn't want to engage with a side quest.

4 & 10, Foreshadow/Historical, are there for world-building purposes, foreshadowing events to come, for example, a dragon beyond the party's abilities, or provide some depth to the world through its history, perhaps the carcass of a dragon, either blighted or brought down by other adventurers.

3 & 11, Distant/Close, give the party chance to prepare or are thrown in media res.

Finally, in D&D the pantheon exist and have a direct impact on the world so 2 & 12 are given over to the direct action of Gods & Dæmons.

I think random encounters can add flavour and depth to a world but I also think it helps me to do some preparation beforehand to make them worthwhile.

Rather than a list of 1d20 monsters I take a 3x5 index card, write an interesting/amusing/alliterative title, add a few region-appropriate monsters (include page references to stat blocks) to the other side with a treasure hoard rolled from the DMG, and write a short paragraph under the title to flesh out the bones. With a map jotted in my notebook, I can pretty much run a game on the fly.

Matching the random encounter cards to an encounter type is fairly easy although some could fall into more than one category in which case, just choose the one that looks the most fun.

Once completed, just write another card to take its place. You only need to have 12 on the go or you could flex the danger levels of the monster/obstacle encounters and drop that number down to 6.

If you have any feedback, comments, questions, I'm on some of the usual social channels and you can find those at the bottom of the page.